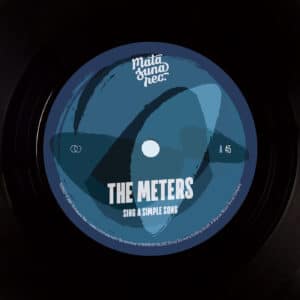 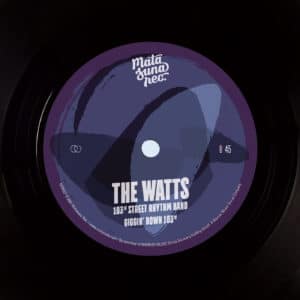 Matasuna brings together two important pioneers of funk on its latest release: The Meters from New Orleans and The Watts 103rd Street Rhythm Band from Los Angeles. The song Giggin‘ Down 103rd by The Watts 103rd Street Rhythm Band was first released as a single in 1968 (as misspress) and is now available again for the first time. The song Sing A Simple Song by The Meters even premieres as a 45! Both tracks have been remastered to offer the best possible sound.

The A-side opens with Sing A Simple Song by The Meters, a cover version of a song by Sly & Family Stone written by Sly Stone. In direct comparison, The Meters cover sounds much more energetic and powerful. The ingredients are simple but effective: heavy drum breaks, funky guitar riffs, deep bassline and a lively organ. A killer instrumental joint that exudes roughness & funkyness from the first second to the last!

On the flipside The Watts 103rd Street Rhythm Band follows up in similar fashion with the song Giggin‘ Down 103rd. Instead of an organ like The Meters, the band offers a super thight horn section backed by killer drums, guitars & bass. A special spicy recipe that thematically fits perfectly for this Funk45!

The Watts 103rd Street Rhythm Band was formed by Charles Wright. Charles, a musician & composer born in 1940 in Clarksdale, Mississippi, moved to Los Angeles in the 1950s. There he played as a singer & guitarist in various doo-wop groups. Beginning in 1962, he formed his own band, Charles Wright & The Wright Sounds, which was joined in the following years by other musicians who would become known in the future band. The name The Watts 103rd Street Band was established in 1967. That same year they signed a record deal with Warner Bros. Records and released their first album. More LPs were released in the following years.
The band played mainly cover versions of popular R&B hits in the early years, but began to create their own songs and form their own sound in the late 1960s, which would have a strong influence on other musicians at the time.
Starting in 1969, the first members left the band to work on other projects. Charles also left the band in 1972 to further his solo career and release various albums.

In 1965, the group The Meters was founded by Art Neville with three other musicians in the musical epicenter of New Orleans. They quickly made a name for themselves in the local scene. The musician Allen Toussaint, who was to become one of the most influential record producers of the 1960s, discovered the band and signed them to his label Sansu Enterprises. They first played as a backing band at live and studio performances of artists of the New Orleans scene, before getting their own record deal with Josie Records. On this label they released three albums, before releasing more in the following years on Reprise Records and Warner Bros. Records. The band officially disbanded in 1977 and reunited a few years later in 1989.
Since then they have been on stage in different formations as The Meters, The Funky Meters or The Meter Man.
Their innovative musical style, which was influenced by traditional New Orleans second line music, West African rhythms, Soul and Reggae, set a standard that would influence many musicians. Also, their music had a significant impact on the Hip Hop community, which sampled their songs hundreds of times.