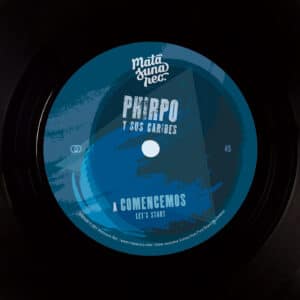 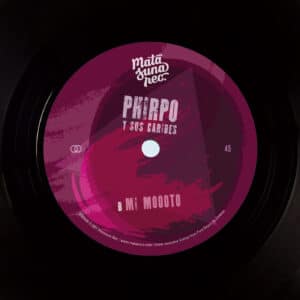 Matasuna Records is back with new Latin fire on 45, presenting two songs from the band Phirpo y sus Caribes by Venezuelan musician, arranger and conductor Porfi Jiménez. Both songs were released on the band’s only album Parrilla Caliente in 1972, whose original pressing is a very rare and sought-after masterpiece. Officially licensed by the family of the late musician.

The A-side is a brilliant Afro-Latin cover version of the song Comencemos (Let’s Start) by Afrobeat legend Fela Kuti. Jiménez arranging talent is clearly audible here, compressing Kuti’s 8 minute version to just over 2 minutes. The result is a highly explosive mix which may without a doubt be considered one of the best Latinfunk songs. The ingredients are extremely spicy: heavy drum breaks & percussion, horn madness and wild guitar interludes will surely hit dance floors!

The song Mi Moooto on the B-side is an original composition by Jiménez. A beautiful example of how Jiménez combines the traditional salsa music of his orchestra with versatile influences like rock, jazz or funk on the concept album from 1972, experimenting and creating something new and great. An essential release for any groove enthusiast.

Porfi Jiménez, whose real name was Porfirio Jiménez Núñez, was born in 1928 in Hato Mayor del Rey in the Dominican Republic. He began his musical training at the early age of 9. After studying at the Municipal Academy of Music he became a member of an orchestra at the radio station Voz Dominicana. Its director Enrico Cabiatti introduced him to the art of arranging.

Due to the Trujillo dictatorship, he left the country in 1954 and went to Venezuela, where the young musician became famous as a trumpeter and played in the most important groups of the time. The quality of his original arrangements opened the doors of the most famous record companies of the time in Venezuela. Porfi also became one of the most outstanding composers and arrangers of those years, rebuilding Cuban José Pagé’s Cuban label Velvet in Venezuela and working for all the label’s national and international singers.

At the end of the 50’s until the beginning of the 60’s, he worked in orchestras of various TV stations in the Venezuelan capital Caracas. In 1963, Jiménez founded his own orchestra, which became known as one of the most important musical groups in Venezuela throughout Latin America.

In the 70’s, musical transformations resulted from the emergence of new musical styles & rhythms. Porfi Jimenez, as a contemporary artist and passionate jazzman, began to incorporate new musical elements into his songs that distanced him from the prevailing commercial style. This resulted in the album Parrilla Caliente, which was released as the band Phirpo y sus Caribes and remained the band’s only album. The production, practically unknown, allowed him to experiment and express his artistic creativity, distancing himself from the traditional style of his dance orchestra.

Salsa music and its orchestras lost importance in the 80s and were displaced by new music. However, another Caribbean rhythm filled the gap: the Merengue, which triggered an international boom. Porfi also embarked on this path, releasing an album that immediately catapulted him back to fame. It was a period in which he received numerous awards, such as two gold and one platinum disc.

Shortly before his death, on June 9th 2010, Porfi Jiménez managed to realize his lifelong dream: the formation of his jazz big band, with which he performed at numerous festivals in Caracas. With it, he left an important musical legacy, with several original compositions and arrangements of the most prominent names in jazz history. In 2007, Porfi Jiménez was honored by the United Nations as one of the most outstanding musicians of the continent.